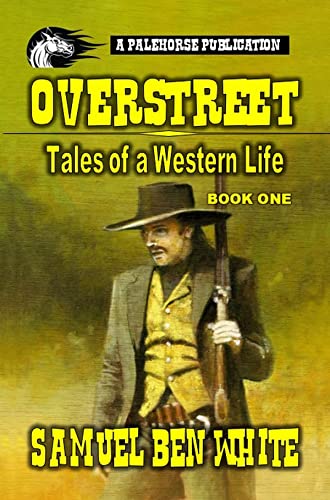 John Overstreet was a cowboy for a west Texas ranch when he killed a man in self-defense and was forced to leave the country or fight the man’s whole family. He follows his fortune to Como, Colorado, and the ULC Ranch. As the years go by and he tries to build both the You’ll See and himself into something, he must face blizzards, fires and gold-hunters. He pursues love and fortune as he sees the turn of the century bring changes to transportation and every aspect of life. But he must keep looking over his shoulder, for the family of the man he killed doesn’t forget … or forgive.

Available for Kindle and paperback.

They could see the lightning hitting the near-by peaks and the thunder seemed to shake the building on occasion.  Still, the lightning did not seem to be too close, most of it centering around the upper reaches of Silverhills, so none of the observers were scared.  Worse storms than this one had been seen just about every week and it was just something you got used to, like catching a cold in the winter or getting a splinter when chopping wood.

Lars, however, commented, “I wish I were up there withCharlotte.  She’s never enjoyed storms too much, and especially with her being down with this sickness.”

He had no sooner said the words than a tremendous bolt of lightning crashed from the sky to the south of them and the accompanying smash of thunder told them this one had hit quite near—possibly even on the ranch.

Lars ran over to the nearest saddled horse and leapt aboard.  John stepped in front of the horse and said, “You can’t go out in this weather, Lars!  Look at that water coming down.  It could knock you off your horse!  If that bolt hit anything this rain’ll put it out.”

Lars ignored John and stepped the horse around him.  He was out of the barn and into the rain in a flash.  John shrugged and jumped aboard the next closest horse.  Fortunately, he thought, Lars took the slowest horse in the barn.

“Where you goin’?” Claud asked.

As John darted out the door and into the rain, he replied, “Wherever he’s going!”

Claud and Bob looked at each other with puzzled looks.  Shrugging, they each grabbed a saddle, threw it on a horse they thought could stand the storm in good stead and took off into the rain in pursuit of Lars and John.  They did, however, take a moment to slip into their slickers first.

They rode up the trail through the woods to the ranch house and John was able to catch up with Lars before the big German could reach the house.  They both saw at the same time, though, that what Lars had feared had happened.  The bolt had hit the house.

Apparently the house hadn’t been wet enough to withstand the strike for it was now ablaze.  The sap that still resided in the log walls was bursting into flame faster than the rain could put it out with a pop-hiss sound that was eerily, deadly like rapid gunfire.  In a matter of minutes, the cabin would be gone.

As Lars jumped off his horse, John realized immediately what the man was about to do.  John leapt from his horse onto Lars, knocking him to the ground.  Through the rain and mud, John said as he struggled to hold onto Lars, “It’s too late, Lars!”

Unheeding, the big man shoved John off and stood up.  The rain was cascading off the brim of his hat, making it hard to see and he was covered with mud from John’s tackle but he took no notice.  Before John could get another hold on him, Lars had rushed into the inferno to try and save his wife.

Just as he disappeared into the flames, John saw a ceiling beam crash to the floor and heard Lars call out in pain.