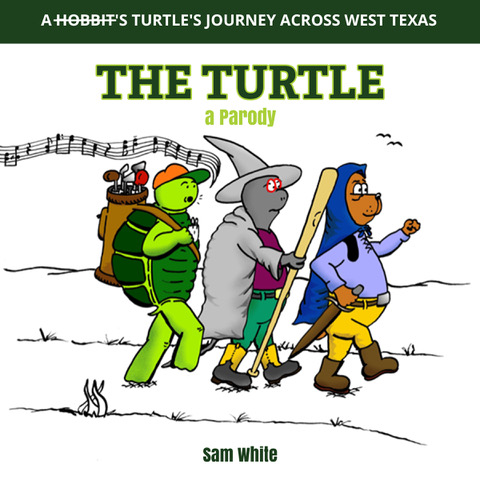 When did you last read a funny book? (Read a sample below.)

“I would chide the author for making fun of one of the great classics of children’s literature if he weren’t so dang funny doing it.”
—Charlie W. Starr, author of The Faun’s Bookshelf: C. S. Lewis on Why Myth Matters.

You can order The Turtle – parody for your Kindle or in paperback by clicking here! Get your audio copy here! Or contact me at garisonfitch@gmail.com for an autographed copy.

Introduction
In a hole in the ground, there lived a turtle.

Without doing a lot of research, I’m going to go out on a limb and say this was not normal, for a swamp turtle anyway. Nor was it a normal hole, such as the wild critters you may have encountered live in, but a nice, cozy hole that smelled of good, swampy food and had the comforts a turtle likes, such as a flat-screen TV and high speed internet.

This particular turtle’s name was Tuttle; Tuttle T. Turtle, or just Tut for short, and he lived in a place the locals called The Shore. It was nowhere near the ocean, but had received its name in antiquity—some said as far back as last year—when after a sojourn of many days and quarter miles an intrepid band of turtles and other critters arrived in these lands. Someone, it is told in lore, asked, “Wanna stop here?” and many other voices replied in unison, “Shore. Why not?” For many days, perhaps as long as a week, they referred to their land by its full name, but eventually shortened it to just “Shore.” It was later that the local tourism board added the “The” in the hopes that doing so would make the area sound like one of those tony neighborhoods on the south side of Amarillo.

Now turtles like a simple life: good food, calm parties with friends, and long discussions about arcane subjects such as neo-Brutalism, square dance etiquette, and the virtues of a good shell wax. Tuttle was no different from his fellow Shorians in this matter and would have been quite happy to remain in such a lifestyle indefinitely or until such time as the new baseball gloves are released in the spring, if his existence had not been interrupted one morning by a visitor he would have been happy to greet had said personage not come with a purpose.

Chapter One
Turtles, you may have noticed if you’ve ever spent much time around them socially, are not generally very active, having all the physical enthusiasm of your average lily pad—for which they are often mistaken.
Alas betimes it was on a cool, crisp summer morning when he probably wouldn’t have accomplished much anyway that Tuttle, sitting on his front porch (yes, his hole had a porch, or a space he referred to as “the porch”, anyway), that a most unusual visitor showed up.
He was all in grey and, like Tuttle himself, went about with armor on his back. Though Tuttle had not seen him since boyhood, he knew instantly that this must be one of the armadillos for they were often whispered about among the residents of The Shore—whispered about because there were, like, a million of them in every neighborhood and while they were, as a rule, hard of hearing (owing to so much operating of heavy machinery and listening to old punk bands with shoddy earphones) they tended to lean close to all conversations and believe with little evidence that they were being slandered.
This particular armadillo was quite distinctive from all others of his kind for three special and instantly recognizable traits: he wore a tall, pointy hat with a wide brim and no ornamentation, glasses with bright read frames, Larry Mahan boots, a large silver belt-buckle won at the Stanford rodeo and—most eye-catching of all—was not disgustingly filthy or ridden with lice.
This particular armadillo was known to Tuttle, if not by him, and his name was Picadillo. A wise man among his fellow dillas, even those outside his fraternity said of him: “Y’know, he ain’t that dumb” to which others might reply, “No, he ain’t.” For Picadillo, or Pic, as some called him, studied books that weren’t about sports or colorable and was known to travel beyond the boundaries of The Shore and have, if not adventures, slightly more interesting than your average times. Stories of these adventurous times came back to The Shore in rumors … because Pic never used a travel agent and this was thought by many to be quite gauche.
And it came to pass that on this morning when Tuttle sat on his porch whittling fine birch logs into popsicle sticks to be used in craft projects later that he (the dilla) didst abruptly say, “Leave us dispense with the ‘good mornings’ and felicitations.” With powers of mental acuity beyond those of most mortals, Pic deftly added, “It means greetings and good will.”
“Which is it?” asked the turtle, interrogatively. At the puzzled look on the dilla’s face, the turtle didst elaborate, “Greetings or good will?”
“Both at once, I suppose,” spake the dilla. Then, as if recovering himself (because he was recovering himself) the dilla didst say, “I will come back one day soon … with friends.”
“Oh-kay,” replied the turtle, drawing the two syllables out as far as was turtly possible. Before the turtle could reply or say more, the armadillo had turned and made his slow, lumbering way down the road.
This being the panhandle (according to legend), the turtle was able to see the dilla walking thence for the rest of the day and into the next morning for the land was, as described by those learned souls who knew it well, flat.