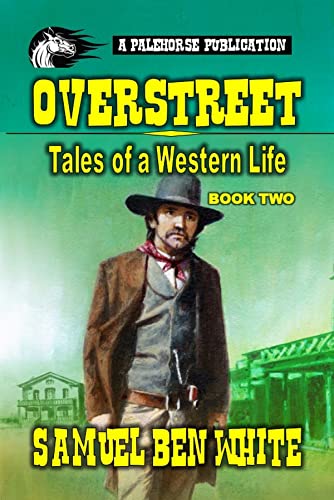 The continuing story of John Overstreet. Settled in the Colorado mountains, hoping his gunfighting days are over. Marriage, family, but still hounded by the family of the man he killed in Texas.

Available for Kindle and paperback.

John knew it wasn’t a good idea to get worked up in such cold weather because a man’s sweat will freeze and form a thin layer of ice inside his clothing. When that happens, the body’s temperature can start dropping rapidly and the result can be frostbite or pneumonia—often leading to death.
But it was a short distance to the Judge’s house and John was clomping up onto the porch in a matter of seconds, heedless of everything except getting there. His breath was coming fast even before he started running and was coming in great, heaving gasps by the time he was mounting the steps. The porch had been freshly swept, but you wouldn’t have known it after John arrived. He took no notice of the mess he was making and knocked loudly on the door.
After a moment, Stoner opened the door and seemed surprised to see John standing there. Through the screen, Stoner said, “I have company right now, John. Could you come back—”
He never finished because John was pushing his way past and into the living room. Ignoring Stoner’s blustering, John walked into the midst of a fairly formal tea comprised of the McClorys, the Bakers and the Stoners.
Everyone looked up and Mrs. Stoner was about to object to the rude intrusion when John looked Mrs. McClory in the eye and said, “You finally came back, huh? You sure took your sweet time about it!”
All the tea partiers were aghast at his bold entry and insolent behavior—especially coming from a normally respectable young man. All took grave exception and made various blustering noises much like the Judge’s, except Mrs. McClory, that is.
She calmly set her tea cup and saucer aside and rose gracefully. She looked at John for a moment, as if studying him from head to foot, front to back and inside out, then asked softly, “James?”
John shook his head and told her, “I stopped being James Conley fourteen years ago. I buried that little boy in the swamps a long time ago, Clarice.”
Most everyone in the parlor was speechless but Clarice McClory seemed undaunted. She took a step closer and said, “I was afraid you’d feel that way, James.”
“It’s John,” he corrected. “My name is John Overstreet now.” He took a step back and said, “I’ve been John longer than I was James.”
Clarice hung her head for a moment and, when she looked up, there was a tear in her eye. Taking another tentative step, she told him, “You’re right, John. To feel the way you do, I mean.”
“Sure I’m right!” he retorted. “I was an orphan and you—my only blood kin I knew how to locate—you never came when I wrote for you.”
Coming closer, she said, “John, we have a lot to talk out.”
Angrily, he told her, “I have nothing to talk about to you. You ran out on Ma and Pa and then you ran out on me.”
“You’re my brother—”
“No!” John shook his head. “I am not your brother. You lost all right to make that claim fifteen years ago! You were James Conley’s sister but you’re not mine!”
Before she could say anything else, John turned for the door. As he left, he muttered to Judge Stoner, “Sorry to interrupt.”
For possibly the first time in his life, Judge Stoner was speechless.