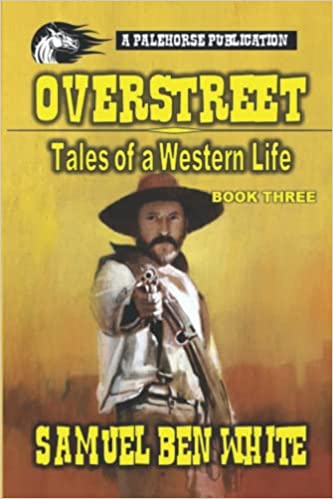 The conclusion of the John Overstreet saga.

Available in Kindle and paperback.

“Aunt Melinda! Aunt Melinda!” Ben shouted as he ran up the road from town. He had run all the way and though he was about out of breath, he was long on enthusiasm and that was making the difference.
Afraid something was wrong, Melinda stepped out on the porch and was relieved that he seemed to be shouting it in a happy way. Still calling her name, he ran up onto the porch and into her arms, panting happily like a dog.
“What is it, Ben?”
He tried to tell her his news, but his wind had finally caught up with him (or left him, depending on how one looked at it) and all he could do was stand there and breathe heavily. He was a blonde-headed boy with his mother’s green eyes and his father’s good looks. A little more stout than his older brother, he was still good-sized for his age and becoming very athletic.
His real passion, though, was art. So he held up a piece of paper and managed, “Read this.”
Melinda took the paper and read, “‘Dear Mister Rathum, We are pleased to inform you that the drawing you submitted has been chosen as a finalist and will be on display in the Denver Museum of Art and is eligible for first prize in The Rocky Mountain News’ Young Artist Competition.’ Oh Ben, this is wonderful!” She gave him a hug, which he barely acknowledged as he took the paper back and read it again.
“Can we go see it? In the museum, I mean?”
“You bet we will!’ Melinda told him with another hug. “We’ll take the whole family. And we’ll be sure and let Jo and Leonard know, too.”
“Can I write them?”
“You sure can.”
“Can I tell Uncle John when he gets in?”
“Certainly.” Melinda laughed and added, “You might want to sit down and breath between now and then, though.”

“Uncle John!” Ben practically screamed as John rode into the ranch yard. “I’m a finalist!”
John got off his horse and, walking it to the Hayloft, asked, “A finalist for what?”
Ben quickly explained the commotion and showed John the paper. John read it and gave Ben a hug. “Aunt Melinda says we can go to Denver and see my picture in the museum.”
“You bet your life we will. Come on, let’s put my horse up, then we’ll go make some plans. Which picture was it?”
“That picture I drew of the Old Homestead with that special pencil you got me for Christmas.”
“That was a good picture.” He tousled Ben’s hair and added playfully, “Must’ve been the pencil.”