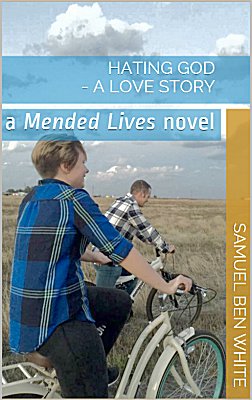 Joe Whitcomb is a preacher, but he’s starting to hate God. Blaming God for killing his wife and daughter, Joe calls himself a “recovering Christian” and vows to leave religion and its crutches behind.

Ellen Leads used to be a promising student even though she came from an abusive home. Off at college, all was going well, she thought, until her whole life was derailed by drink and now she calls herself a “recovering alcoholic”.

Sometimes, running from your problems is easier if there’s someone running with you.

Neither has actually dealt with their problems, though, just shoving them further and further back into the recesses of their minds. One night, just as love seems theirs, their carefully-crafted web of self-deceptions blow up on them and everything falls apart.

Was there ever enough substance there to put their friendship—let alone love—back together?

With the little strength she had left in her, she struggled over to the sink and pulled herself to her feet. The taste in her mouth made her want to not just brush her teeth but paint the entirety of her mouth and throat with toothpaste. With shaking hands, she put the paste on the brush, dampened it with water, then stuck it in her mouth.

It was a mistake. Having anything in her mouth was a mistake. She was soon sick again, though she had emptied herself just moments before and now was left with only dry heaves.

When the convulsions were finally over, she thought about just crawling—literally crawling—from the bathroom and back into bed. But her head was pounding from the dull thump of her heartbeats and she was determined to try and get some aspirin down. If she could just keep it down for a few minutes—which she acknowledged was a longshot—maybe it would do some good. What she needed, she told herself, was a little “hair of the dog,” but if her faulty memory served she had polished off her last quart the night before.

Or early this morning.

It wasn’t really a big deal, she thought. Most of her days were like all her other days so which morning or night she was currently dealing with was pretty much a moot point.

The aspirin was in the cabinet behind the mirror, which she reached with a struggle. Her legs were weak and her hands still shook but she managed to open the door and, with blurred vision, locate the right bottle.

Why would there only be one aspirin? She always took two at a time and there were supposed to have been an even number in the bottle to begin with. Too sick to puzzle over the question further, she leaned over the sink for a handful of water and took the one aspirin. It was all she could do to keep from gagging, but she managed to stifle her urge to vomit by literally holding her mouth shut with her hand.

Then she stood there, bent over the sink, hands firmly gripping the edge of the vanity, willing the aspirin to stay down. She wasn’t sure how long she would need to stand there to make it go into effect, but she was willing to stand there forever. Or until her legs gave way. She figured she had about two minutes before that happened.

Determined to go find some place comfortable to just sit and close her eyes she straightened up, only to bang her head against the open door of the medicine chest. With a shouted swear word that made her head come just millimeters from exploding, she slammed the cabinet door then winced from that sound, too. She touched the spot on her head that had collided with the door and found that she was bleeding. Not bad, but there was a little blood. So she opened the cabinet and found some analgesic cream, then closed the door again so she could look in the mirror as she applied it.

As she was putting the cap back on the cream, she took the first good look at herself in a mirror in . . . she wasn’t sure how long. She washed her hair regularly (she thought) and combed it, but when had she last taken a good look in the mirror? A while, she admitted.

What she saw revolted her. Her hair sure didn’t look like she had been washing it regularly, though she was sure she had washed it the day before—or maybe it was two days ago. Could have been three, she admitted. What had once been thick, full, light brown hair, now was a limp, lifeless mass of dark greasy . . . swamp weed.

And why didn’t her clothes fit like they used to? It was like everything she wore had gotten stretched or something, as if they were a size too big. Was she wearing her roommate’s clothes?

She realized she looked like the people she had always looked down on.

“I gotta do something ’bout this,” she muttered. It took her a moment to remember what day it was, but she finally became fairly certain it was Sunday. “First day of the week,” she muttered, still tightly gripping the vanity. “This’ll be a good time to start.”

The first thing she had to do, she soon realized though, was throw up again.