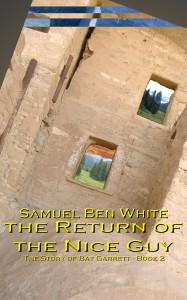 Book 2 of The Story of Bat Garrett

Two years after the murder of a prominent north Texas banker has been solved and the killer put in jail, Dallas private eye Bat Garrett is hired by an attractive widow to find out why her husband was killed.
The police (and everyone else) say it was just a robbery gone bad, but the widow thinks differently.
With Jody Anderson still on crutches from her horrific ordeal in “The Nice Guy” but by his side as always, Bat undertakes a case that leads him through an amateur archaeological society in Dallas and into a centuries old mystery in the ancient ruins of Mesa Verde in southwest Colorado.
Did the unassuming banker uncover something someone else would rather have stayed hidden?

Order Today on Kindle and paperback!

Make sure you read the prequel to this book, “The Nice Guy” and book 3 in the series, “Up to Bat“!

Without a doubt, that was the best summer, fall and winter I had ever had.

As we have come to expect from the geniuses in government accounting, the Home Agency let me keep the money they had paid me for the job I had done for them back in the spring. It was way more than the job was worth—well, I should probably …

Anyway, I took the money and invested it in a friend who was opening up a baseball card and comic book store in Farmer’s Branch. As investments go, that wasn’t a whole lot better than just piling it up in the back yard and setting fire to it, but it gave me a chance to help out a guy who had been a good friend for a long time—and especially when I had needed one.

My private investigating business was starting to take off, too. I wasn’t getting any glamorous cases, but word had somehow gotten around that I was a pretty good hand at surveillance and so I was getting fairly steady work—some of it even from other investigation firms. I’ve always been a pretty plain guy, so I was a natural at hanging around in the background and watching other people without being observed myself.

Of course, the thing that made that summer, fall and winter better than all previous summers, falls and winters was that I had a girlfriend. A real, honest-to-goodness, she-likes-me-as-much-as-I-like-her girlfriend. I had never really had one of those before. Well, there had been Thalia, but that had been … oh, never mind.
Her name was Jody Anderson and she was the love of my life. The one you know that—even if things were to go sour—she’d always be the one you’d think of as “the one great love.” The kind you’d write songs about if—unlike me—you had rhythm or any sense at all of musical style.

She had shoulder-length hair that was somewhere between auburn and brown, tending to the red in the sunshine. She was petite of build but a perfectly shaped figure for all that. And she had this great little mole just above the left corner of her mouth.

She might not have thought of that summer as a great time, because she spent most of it in the hospital, or in rehab. She had shattered her right leg—above and below the knee—and there was talk on more than one occasion that it might have to be amputated. I think she kept it strictly out of will-power.

She had broken the leg while on the job with me for the Home Agency. She had also been shot, but that—by comparison—was easily dealt with. I mean, by itself, it would have kept her in the hospital for a couple weeks at a minimum. But then she would have been out and rehab would have probably consisted mainly of walking and getting her lungs back in shape. The leg, though, was a process of multiple surgeries and rehab that lasted well past Christmas.

So I say that the government overpaid me, but I doubt that Jody would say the same thing about the remuneration she received. They took care of her medical bills, of course, but no amount of money would be worth that kind of pain and suffering.