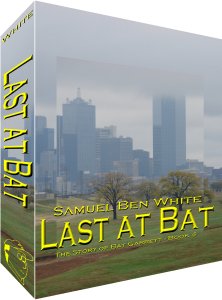 A ghost. Bat has to be seeing a ghost. While recuperating in Houston he stumbles across a shopgirl who looks and sounds just like someone he lost a year before. As his friends think he’s going crazy, and even he’s starting to wonder if he watched “Vertigo” one too many times, he tries to piece together the background of the shopgirl. The investigation takes Bat from Houston and Dallas, to Arkansas and Durango (where he meets a young Garison Fitch) and closer to the conclusion that he may not have been the only one set-up by the Home Agency.

To read more about Bat Garrett, be sure and check out “The Nice Guy“, “The Return of the Nice Guy” and “Up to Bat“. All available on Kindle & in paperback! And, if you want to read this story from Jody’s perspective (as well as find out what happened next), be sure and read “Cheerleader, Gymnast, Flautist, Spy“!

“What is it we’re going to go look at?” Dave asked as we walked through the mall. I was surprised how few people were there shopping, but I guessed it was because it was a week day.
“Sunglasses. I’m telling you, Dave, these are the ugliest you’ve ever seen. They would have been great for that day in college when we had the ‘Ugliest Outfit’ contest.”
“I didn’t know the Galleria had a gag shop.”
“It’s not intended to be, but these will make you gag.”
As we were nearing the store, I saw a girl walk into the shop ahead of us who just about took my breath away. I stopped dead in my tracks and could feel my heart pounding in my chest like faulty pistons in a Ford Granada. If I had been prone to such things, I think I would have had a heart attack. The quick and unexpected (even to me) stop on the crutches almost made me fall on my face, so I had to take a moment to regain my balance.
“What—what is it?” Dave asked. The look on my face must have scared him. I imagine I went almost completely white—maybe even green.
“That girl that just walked in.”
“So? She was cute; but we’ve seen several of those today. She wasn’t as pretty as Heather, I didn’t think.”
“No. This girl looked like … like someone I used to know.”
“Let’s go see her,” he said. “Maybe it’s her.”
“Couldn’t be.”
“Why not? Houston’s a big city.” He smiled, “Shoot, I bet there’s more than two hundred people in this town. I hit that many cars in the parking lot.”
“But this couldn’t be her, Dave.”
“It’s a small world, Bat.”
“But it’s not the Twilight Zone.”
“What are you talking about?”
“The girl she reminded me of is dead.”