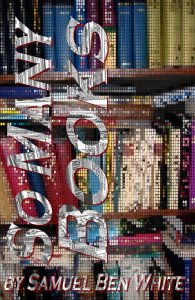 He had never seen so many books in one room. Stacked on rickety shelves from floor to ceiling, they overwhelmed the room, and the visitor. Chris Farmer, investigator for the Bureau of Indian Affairs, suddenly felt like he knew nothing about the person he was trying to help. But he was suddenly curious. Why would someone so young-why would anyone-have so many books? Alyste Smith was a young woman who lived with an abusive step father and longed to escape. The only way she knew how was through books. So she read and read and read, hoping beyond hope that, one day, a hero like the ones in her books would walk through her door and rescue her.

I had never really noticed her until I saw the books. Hundreds of books (thousands, I was to learn later) adorned her small room. She had bookshelves she had brought in from somewhere at, I guess, the start of it. Between them she had built other shelves. They would have made Norm Abrams cringe, but they would have warmed the heart of any librarian.

Some shelves were built by putting a board across cinder blocks, then more cinder blocks, then another board and so on up to the ceiling. In some cases, where cinder blocks or other bricks couldn’t be found, larger books were used to hold the shelves above off the books below. Here and there an ineffectual nail had been driven into a board to secure that board to the side of another shelf or to the wall itself. The whole business showed a profound lack of engineering knowledge but would have made even Rube Goldberg envious.

How the whole mess stood and hadn’t collapsed and killed her years before I have no idea. My own experience with dismantling it all brought a few paper avalanches that threatened to take my own life, but I’ll have to get back to that later.

“You’ve read all these?” I asked in dubious wonder as I looked at the books that lined the walls from floor to ceiling, making the little eight by ten room about seven by eight and a half. If she could have figured out a way to attach a bookshelf to the back of the door, I was sure she would have.

“Uh-huh,” she nodded. Then, in the apparent need for accuracy, she amended, “Everything but these two shelves. I haven’t read them, yet. But I will.” Pulling back the covers on the bed, she revealed a weathered paperback and, picking it up, said, “And this one. I haven’t finished it, yet. I …can I take it with me?”

“Yeah,” I told her, still looking in awe at the walls-which I couldn’t see, but assumed they were back there-somewhere-behind the books.

I knew there were more important and pressing matters, but I couldn’t help stepping closer to the books for a moment. There was no discernible theme in the volumes chosen. I saw a few romance novels, of the kind I would have stereotyped a young woman in her position to read. But I saw much more. There were psychology textbooks and biographies of famous people, from Teddy Roosevelt to Tacitus, and books by Twain, L’Amour and Kafka. There was a shelf of books by CS Lewis, just above a shelf of books by Tolkien (having never read either, I had no idea of the significance of this paring). I saw books on horticulture and agriculture and books of poetry by people with names I couldn’t read, let alone pronounce.

“All of them?” I asked again, though not necessarily meaning it to be out loud.

“All of them,” she confirmed.

“Do you have a favorite?”

I happened to be looking at her at that moment and realized from the look that flew fleetingly across her face that I had asked her a question akin to asking a mother which of her children were her favorite. When her composure was regained, she replied, “Probably whichever book is in my hands at the moment you ask.”

I pointed to the book that she had picked up off the bed and asked, smiling and trying to make it sound friendly, “So right now it’s that one?”

She looked down at it, a slight grimace at the corner of her mouth, then back at me and replied, “No. Not this one. It’s not that good.”

There was just the slightest hesitation before she answered, “Because I started it.”

For the first time, I took a look at this remarkable person who had, up until that very moment, just been a part of another complicated if strangely routine and boring case.

The way he looked at the books intrigued me.

Not many people had seen my collection of books, but some had. All the others had had pretty much the same reaction, though. Wondering why I had so many books, why I wanted so many books, or complete incredulity at my claim to have read them all.

People my age were the worst. The couple times I had met people my age who claimed to be readers, when they saw all my books, they usually looked at me like they thought I was crazy. Most of them, I would find out (if given the chance, most were gone after a glimpse into my room), read more than the average teenager, but they only read one thing. All romance books, or all mystery novels or all books on a single subject. That, to me, sounded like eating the same thing meal after meal, year after year. I like pizza, but I have to eat some other things now and then, you know?

So when he looked at the books with amazement, I thought I had found a soul mate. I was so surprised later to find he wasn’t a reader. Oh, he knew how, of course. He had just never known why anyone would do it on purpose. What struck me, though, was that he didn’t dismiss my reading. And when he found out just how many books I had, he didn’t renege on his offer to carry them all out. For the first time since my mother died, someone saw my books and didn’t treat me like a freak.

On the other hand, I have never been able to understand people who don’t read, or don’t love reading. I love reading. Even when my life was going well, I loved reading.