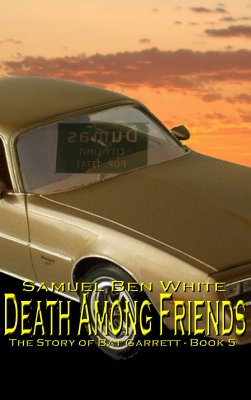 Bat Garrett goes to the funeral of a friend from high school, only to find that there are some family members of the deceased who think the death wasn’t accidental. Bat begins to look into the death and is confronted by old memories, some ex-girlfriends, and the disturbing idea that–if it was murder–it was committed by someone Bat knew.

Now available on Kindle and paperback!

When I got my private investigator’s license I figured my life would be a lot like the lives of those guys who used to show up late at night in the old shows on cable. High speed car chases, fist fights (where I would always win), and beautiful women who find a guy with a spotty income strangely alluring. Occasionally even solving a case.

Why was I so often surprised back in those days when life didn’t imitate art? Or even TV?

What the TV shows were especially bad at portraying was the stakeout. Oh, you would have the obligatory shot of the guy in his car at night, flashing neon in the distance, as he sips coffee from a thermos to set the mood, but considering the shows were only an hour long (minus commercials) they couldn’t show the reality of a stakeout.

Hour after hour, and sometimes night after night, just sitting there. Trying to stay awake and trying not to drink too much coffee ‘cause then you gotta go to the restroom and leave your post. So you just sit there.

And, if you’re me, drinking no coffee at all because you hate even the smell of it so you drink Dr Pepper like it’s going out of style, which still leads to bathroom issues.

Sometimes, you have a client who wants a meticulous log of everything that happens. “12:15Dog barks. 1:17Pizza delivery. Delivery vehicle license number … “ It sounds miserable and tedious—and it is—but at least with those you have something to do.

This was not one of those nights. I was sitting in my car across the street from an all-night diner that served, based on the smell, fried grease. As a side dish, one could order lard straight. But working in the diner was a woman who was being rapidly stalked by middle age and a husband who was convinced she was having an affair with one of her customers.

Now, you may be thinking that my job would be to watch her through the windows and see if she paid anyone any special attention. Not exactly. The husband was pretty sure who the affair was with, so I was supposed to sit there and watch to see if the Assumed One showed up and, especially, if the Waitress Woman were to leave with him.

Five nights down and not only had the Assumed One never showed, the Waitress had treated all of her customers with the same hostile indifference. Most of her customers left looking less than happy, so I couldn’t really see any of them saying something like, “Hey babe, after that rather belligerent service and a sandwich made—apparently—from old shoe leather, there’s nothing I’d like better than to take a hot mama like you out on the town.” Eight and a half hours after she would clock in (with a thirty minute “lunch” in the middle which she smoked away on a bench around the side of the building from the front door) she would leave and go straight home.

If this were a television show, the reason for the whole farce would be that I had been working on another, more important, case and this whole thing had been cooked up as a means of distracting me. In real life, I had taken this under-paying and boring job because there just wasn’t anything else, and hadn’t been for some time. It was a slack time in the P.I. biz, apparently. And being winter, it wasn’t much of a time for painting houses, either (my other listing in the phone book).

With Jody’s paycheck from her job as a speech therapist barely covering necessities, I was taking any job I could get in hopes of making ends meet. Thankfully, our cars were paid for and we didn’t pay much in rent, but you can’t eat an apartment—even the green moldy stuff on the walls that looks almost edible. We were still newlyweds in a lot of ways but, as much as I like old Glenn Miller tunes, his song about being able to live on love was starting to ring hollow.

Another night looked like it was going to drift by with no consequence when, just after three-thirty in the morning, a car that looked like the one I was told Assumed One drove pulled up in front of the diner. I perked up a little, then. I perked up a lot when the Assumed One, Mister Wally Norris himself, got out of the car. Tall, slatternly, with a one of those big droopy mustaches like country stars wore back in the eighties, I positively identified him from a picture I had been given when he stepped into the lights of the diner’s front entranceway.

As he went into the diner, I slipped quietly out of my car and closer to the diner, camera at the ready. Once in a position where I could get some good pictures of pretty much anywhere in the seating section of the diner, I started snapping.

It was a fairly old—let’s say broken-in—SLRand worked beautifully. For daytime shoots I was transitioning to a digital camera, but for nighttime work nothing beat that oldSLRand some 1200 film. Cameras may have gotten simpler to use as time has gone on, but that old camera could practically take the pictures itself even without auto-focus. It eventually developed a light leak I couldn’t get fixed and I sold it to a collector, but I always regretted it later, thinking I should have given it a place of honor on a shelf in my office. But I didn’t have a shelf in those days, let alone an office, and the collector helped me make a rent payment, which is neither here nor there for this story as it was some years later. Months anyway.

So there I was, getting pictures of him walking into the restaurant. And then there’s a picture of the Waitress looking none too pleased to see him. As I’m snapping away, she points toward the door, instructing him to leave. (It’s clear from the body language; I didn’t have to hear what she was saying.) But Assumed One steps right up to her and grabs her by the arm.

He should have grabbed the other arm—the one carrying a customer’s food—because she slammed the tray full of food upside his head. It was a horrible sight, all that Salisbury steak and candied apple slices spreading across the room. My last picture showed him letting go of her arm as he reached for his gravy-covered face, trying to get the apple chunks out of his eyes.

I dropped the camera—trusting the shoulder strap to take care of it—and darted for the diner’s door. By the time I was through the door, Assumed One had cornered Waitress behind the counter and the one customer was a guy who was rooted in place by fear and shouldn’t have been screaming like that in my humble opinion. His screams were soon drowned out by the screams of Assumed One, who had just taken a saucer of hot grease to the kisser.

No, I don’t usually talk like that, but it is a private eye story.

As Assumed One hit the floor on all fours and clawed at his face, the cook called 911 and the Waitress stood over her assailant with the saucer held in a threatening manner. I wouldn’t have thought it could be done, either, if I hadn’t seen it. If she had been holding a Glock with a round in the chamber, her demeanor could have been no more menacing.

Despite graduating from a correspondence college with a degree in private investigations and a long-ago Boy Scout merit badge in First Aid, I wasn’t sure what the protocol was for “hot-grease-in-face”. Still, it seemed like something ought to be done, so I pulled out my gun.

“The cops are already here?” asked the cook in impressed dismay, popping up from wherever he had been hiding.

“Probably just someone else that wants to kill him,” the Waitress grumbled, remarkably calm about the whole thing. Seeing my weaponry, though, she set down the saucer. Then, told me, “Go ahead and shoot him. I’ll gladly testify it was self defense.”

Assumed One, peaking at me from between his fingers with one red eye, just whimpered and made a larger mess on the floor than had been there previously. “I’m not going to shoot you,” I told him.

“More’s the pity,” said the Waitress.