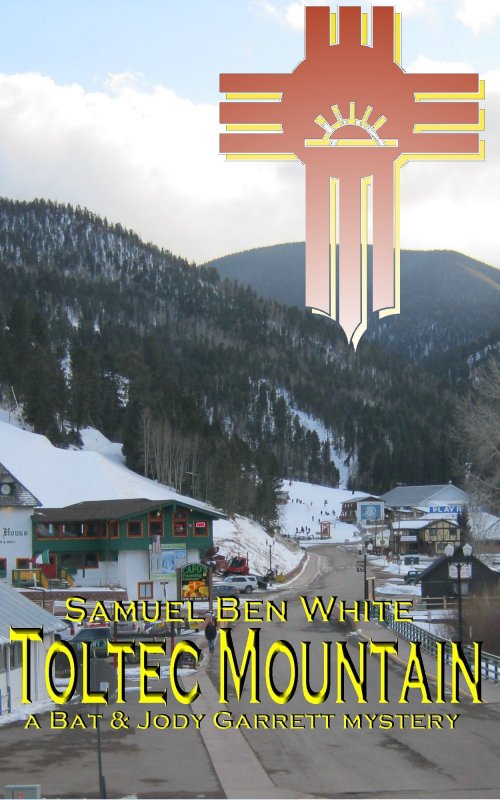 Dallas private eye Bat Garrett is called in to investigate a snowboarder who crashed in the “Mind Games”, a made-for-TV spectacular being held at Toltec Mountain Ski Area in New Mexico. What looks like just a routine accident–like the many other accidents that have happened on the slopes–becomes more suspicious when the snowboarder is found dead in her hotel room. Soon, there’s another death, and then another. Is someone stalking the “Mind Games”? Can Bat–and his wife, Jody, who is working the case undercover–unravel the mystery before the bodies pile up higher than the snow?

Order it today on Kindle and paperback!

It was about lunchtime when I found myself sitting on a bench at “ski-Techers”, getting fitted for boots and skis and poles. Ski boots had come a long way since the first time I had put any on, but they still weren’t what I would call “comfortable”. They were, at best, “comfortable for ski boots”. I think it was Dave Barry who first referred to them as “bowling balls melted down to fit your feet” and they still felt like that in a lot of ways. They had more padding in them than they had back when I first tried the sport, so that was an improvement.

As the tech put my boots to the skis, I commented, “I saw that wreck from Monday with that Nitro lady. Looked pretty rough.”

“Uh hmm,” he replied, checking the bindings against some sort of chart.

But then, one of the other techs, who didn’t have anyone to help at the moment, injected, “Pretty wicked, wasn’t it? Almost looked like she slammed that board down on the rail a-purpose, huh?”

“Oh, it just seemed to me that no one would land on a rail like that unless they were trying to. Maybe she’s got some new trick that that was supposed to be the lead-in for, though.”

My tech had finally done whatever it was he was doing and entered into the conversation by saying, “I can’t imagine what that would lead into.” Then he laughed and offered, “Unless maybe the board’s made out of some sort of space-age rubber where you hit it on the rail and ‘sproing!!’ you go bouncing thirty feet into the air!”

Who still uses the term “space-age” I wondered? That was like something out of the sixties. But then, so were the ski techs. Not that they were old enough to have been born in the seventies, even, but I had noticed before that a lot of the ski techs (at every mountain I had been to) wished for a decade they hadn’t experienced except on film.

“But normally,” I mused, “Wouldn’t a landing like that just be kind of jarring? I mean, those snowboards are built to take some punishment, aren’t they?”

“Sure,” said the tech that wasn’t working on my gear, “But she hit it hard. They were showing a close-up of the crash on the sports channel last night and she hit it harder than those two chuckleheads that were trying to break a snowboard on the post office steps yesterday.”

I kept my mouth shut.

When I stepped up to the first lift line at about one o’clock, I was a little nervous, as usual. The first ski run of the year never bothered me, but the first attempt to get on and off the lift did. I hadn’t fallen off a lift in years, but the memory of my first couple times skiing—when getting off the lift was clearly my weak spot—still lingered.

Most of it was alleviated when the guy standing there telling people, “Stop here and look for the chair” said, “You’re that private detective, aren’t you?”

“My brother works at the hotel,” he replied. Before I could pursue that line of thought further, the chair was whisking myself and a middle-aged stranger up the mountain.

“You’re a private detective, huh?” he asked in the gravelly voice of someone who smokes too much.

“Yes,” I replied, trying not to sound too cautious.

“Must be interesting,” he replied.

Before he started in with, “I run an auto parts store, myself. I tell you, somebody ought to do a TV show about my work.” The rest of the ride was filled up with the glorious and lewd antics of the auto parts world. I had to admit: I was surprised there wasn’t a show about it already.

Those first few minutes were a microcosm of how my afternoon went. On an afternoon where the mountains were covered with television cameras and actual (or cable, anyway) celebrities were to be found everywhere you threw a snowball, everywhere I went people wanted to talk about being a private detective.

At first, it was kind of fun being a celebrity, but it quickly grew old. For one thing, I had always enjoyed a sense of anonymity in relation to my job. Not that this particular case required it, it still seemed strange to be known—“made” in the vernacular.

Which led to some wild speculation about why I was there. There was a rumor that someone was stealing the high-end equipment used by the athletes. Another one said there was somebody stalking one of the skiers. Still another said there was some suspicion of financial impropriety in regards to the Games themselves. A couple other rumors alleged that the indoor games were fixed in some non-specific way.

Of all the people I heard from, no one hit on the real reason I was there, which I found strange as I would have guessed that someone would have heard the story of the video I had watched with Penny and Pete. In a way, though, that made me feel a little better about my diagnosis because I was thinking that, if someone really had sabotaged Nitro’s board, that rumor would have gone around.

When the runs closed at 4 o’clock, I checked in my equipment, switched back to street shoes, and made my way to supper where I was invited to dine with a couple of the athletes from the Men’s Downhill Extreme, which I was to learn was the ski version of the terrain park Nitro had crashed on. In fact, it was held on the same park, just targeted toward some different obstacles.

The topic of conversation at supper was that day’s outdoor activities and some trash talking about the evening’s indoor games. If Nitro’s crash of Monday entered anyone’s thoughts on that Thursday evening, they said nothing about it. The big topic was a killer run put in by Steve “Onionhead” Wachowski. He wasn’t in our group, but the word at our table was that he would have to really blow his Scrabble™ game to not finish the day as the favorite for the D-E. Apparently, some new trick with a name that meant nothing to me had been the kicker. Something like the “Double-Back-Front-Triple-Lutz-Alpaca” … or something to that effect. They tried to describe it to me, but the terms they used were not, as far as I could tell, in any known language, so I just nodded like I understood them and we moved on.

From there, I made my way to a couple other popular hangouts, was greeted cordially on the street by people I had never met before, and managed to learn absolutely nothing about the case. Monday’s crash was ancient history. If there was any news in Toltec that evening, is was either that there was a P.I. in town or Onionhead’s mind-blowing run. No other topics were being discussed anywhere—at least in my presence.

Finally, I found my way into The Dive Bar and the presence of a beautiful, auburn-haired young lady who I happened to know was a year older than me but looked like she fit in with the coeds around her. Sipping her smoothie, she did a good job of pretending to play up to me and, maybe, even making any casual observers think she was slightly tipsy. Unless someone had spiked the smoothie against her will, I knew she was no more tipsy than I was.

When it seemed like enough time had passed that I could credibly pick her up, I invited her to leave with me and she did. Back in my “real life single scene” I had always been too chicken to meet girls in such a setting, let alone try to get one to leave with me (I could rarely work up the nerve to ask out even the girls I met at church!), so it was kind of a thrill to walk out of a crowded bar with the prettiest woman there on my arm.

Still, I was really curious about that hair!