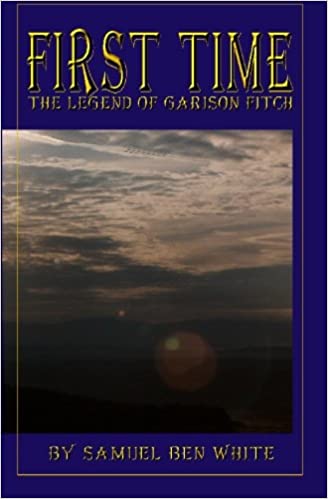 What if history didn’t happen that way the first time?

Garison Fitch was a scientist and something of a celebrity in the Soviet Americas in the early 21st century until dropping off the map to pursue his theories in the remote La Plata Canyon.

An experiment with such travel surprised him when he landed him in 1744. There he discovered a primitive world of somewhat suspicious people, but a freedom he had never experienced before–which may have been most frightening of all.

When he tries to rid himself of his time machine by sending it into the future, however, it took him with it. Now, he finds himself back in the twenty-first century where a woman he has never met claims to be his wife and the country he grew up in is gone, replaced by something called “The United States of America”.

Order today on Kindle or paperback!

The Legend of Garison Fitch continues in “Saving Time” and concludes in “Lost Time“!

With a flash of light and a complete absence of noise, Garison found himself swept out of the eighteenth century. He had just begun to have the beginnings of a thought that would have turned into wondering where he was going when the trip ended. In all, he had traveled for a length of time that would have registered on his body as less than a nano-second. To the world, however, the trip took longer. Still, it was not as long as Garison would have guessed it to be.

Garison and the interdimensional machine-come time machine reappeared in his laboratory inColoradoapproximately one point three seconds after it had left. With a pop that signified the nuclear core had just melted all the circuits then collapsed in on itself into a ball of radiation with a half-life of a few millennia, Garison found himself dressed for the seventeen-forties and standing in the early twenty-first century.

He was suddenly assaulted by a woman who threw her arms around him before he could get a good look at her and exclaimed, “It worked Garison! It worked! You were gone and now you’re back!”

There were so many thoughts and so much confusion going through his head that all he could do was stand there limply while she hugged him tighter and tighter, kissed him on the cheek, and went on and on about how proud she was of him and how she just had to congratulate him and how she wanted to hear all about it.

When she had worked her way across his cheek and was on the verge of kissing his mouth, he finally got his wits about him enough to push her away and stand back a pace himself. He backed into a bench and turned to look, momentarily surprised to find a work bench where there wasn’t supposed to be one. He also spotted the tarpaulin under his feet, and kicked it away in anger.

The woman looked at him strangely and asked, “Garison? Is something wrong?”

He looked around the room without answering. It was his lab all right, but it was different. The windows were in the wrong places, but only by a foot or so. The workbenches had been moved and the place was, well, decorated differently. His lab had been strictly utilitarian while this one had curtains on the windows and some sort of wall-paper border half-way up the walls.

But, he told himself, the cameras are in the right place. There were four video cameras, one mounted in each corner of the room, but their lights were showing red instead of green. While the workbenches were in different spots, the tools on them were laid out just as he would have laid them out and there was the right number of workbenches.

Then he looked at the woman. She was beautiful. She stood almost as tall as Garison, probably five-eleven or six foot he estimated. She had shoulder-length black hair, done in loose curls such as the women had worn in the twenty-first century he remembered. She had green eyes like Sarah’s, but was dark complected like someone who spent time out in the sun. Her figure was astounding, and quite shocking in a sweater and form-fitting pants made of, it looked like, the sort of material he had once seen warm-ups made of. On her feet, she wore white leather tennis shoes much like the shoes he had once worn himself.

He looked up at her and noticed that his confused scan of the room somehow troubled her. He looked her over from head to foot once more and asked, “Who are you?”

The look of confusion turned to fright as she stepped forward and started to put a hand to his head, “Are you OK, Garison? Did you hit your head?”

He brushed her hand away angrily and stepped to the side. “No, I didn’t hit my head. I’m fine. Who are you?” In fact, he thought to himself, the concussion symptoms of moments before and the dizziness were completely gone.

She looked as if she still wanted to touch him, but kept her distance. Then, it was as if she were seeing him in a whole new light as she said, “Wait a minute, you’ve changed. How did your hair get so long in two seconds? How did you grow a mustache that quick? And those clothes? Except for that jacket, you look like you’re…from the revolutionary war or something. And you look older.” She looked extremely concerned as she implored, “Garison, what happened?”

He demanded more forcefully, pronouncing each word carefully and distinctly, as if she might not have heard him before, “Who are you?”

“Heather,” she replied, as if it were something he should know. She took a step closer, but he took a step further away, backing down the workbench, keeping one hand on the cabinet as if it would steady him.

“Heather? Heather who? I don’t know a Heather. What kind of name is that, anyway? A plant name?”

“You don’t remember me?” she asked, seeming totally at a loss—and looking genuinely worried.

“Fitch? You’re not related to me. Just what are you trying to pretend here?”

She reached out to touch him again and again he slapped her hand away, this time with more force. As she brought the hand back, seemingly shocked that the slap had stung, she said, “I’m not just related to you, Garison. I’m your wife.”

“My wife?” he replied with a forced laugh. He stood there and stared at her, wondering what this woman’s game could be. A spy? he wondered. The KGB had been known to use some pretty elaborate schemes to learn information, but he had never heard of one like this. Did they think just sticking a stranger in his lab who claimed to be his wife would make him tell some secret? There had to be more to it.

She reached out again and asked, “What happened to you, Garison?”

He stood there rigidly as her fingers reached out and touched the side of his face very lightly. Did she really think that the touch of a woman would make him break down? He almost smiled as he thought of the futility of her actions. Still, he wondered what the point to her actions were. She seemed to have a point, but he couldn’t imagine what it might be.

She came a little closer and looked intently at him. After a moment, she touched the corner of his right eye and asked with something that sounded like genuine puzzlement, “What are these?”

In spite of himself, he mumbled, “Huh?”

“These lines around your eyes. You never had these before.” She pivoted slightly to look at both sides of his head and said, “And you’ve got gray hair that wasn’t there before you left. How do you turn gray in a couple seconds?”

“I’ve been turning gray for—who are you? Tell me the truth!”

Garison had to give the girl credit for acting. She certainly seemed convinced of her part even if her part were ridiculous. In fact, it actually seemed like she believed what she was saying. Could it have been possible that she had been brain-washed or something into believing what she said? If so, he wondered, what was the point? She had to just be a very good actress, he thought. The whole charade was too stupid to accomplish anything.