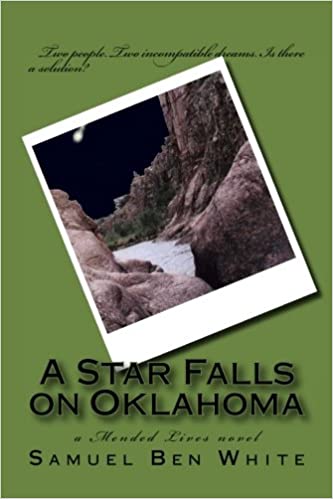 Rising star Sonya Kiel suddenly drops off the grid and lands on the doorstep of her cousin Lynette, who lives in western Oklahoma. Telling herself she’s just slumming and slowing down, Sonya finds herself enjoying the bucolic lifestyle … and Lynette’s best friend, a youth minister named Andy Brockton. Her life begins to be pulled in two directions as part of her desires to return to the bright lights and the silver screen, but another (and previously unknown part) wants to leave it all and follow Andy onto the mission field. Her dilemma becomes, literally, a life and death decision for her family.

Order today on Kindle or paperback

Andy and Sonya also appear in the murder mystery “Ghosts of Families Past“, so make sure you read that one, too!

“I can’t believe I let you talk me into this,” he grumbled as she straightened his tie. “Tell me again how you, a girl from western Oklahoma, have a cousin from England.”

Lynette let go of Andy’s tie and said, “My father’s younger brother was a Rhodes scholar. Smartest member of the Kiel family they say—before me, of course,” she chuckled. “He went to England to attend Oxford and avoid Vietnam and became a stuffy college professor. At forty, he married one of his students and proceeded to have eight children with her before he was fifty.”

“Eight?” Andy asked, though he was afraid of getting distracted from his original objection. “So, which one of the eight are you setting me up with?”

“Number five,” Lynette chuckled. “Or, Sonya, as her family calls her.”

“Nineteen. And before you can object again, it’s only a three year difference and she’s very mature for her age.”

“The age is the only thing about this whole deal I’m not objecting to,” Andy quipped as he put on his suitcoat.

“For starters—well, actually, I’m not sure where to start. I’ve only been on one blind date in my life and it was a disaster.”

“Really? When was this?”

As they walked out to her car he said, “Back when I was doing that summer internship in Houston one of the girls in the youth group invited me to go out and play miniature golf with a bunch of her friends. I didn’t realize it was a date until about thirty minutes into it and I started counting heads.”

“Yeah, I realized there was an even number of boys and girls and all but one of the girls was already holding someone’s hand.”

“Was it that bad?” Lynette chided.

As they got into the car it occurred to Andy that he hadn’t complimented Lynette on how she looked, and she did look nice. The thing was, he and Lynette had known each other since seventh grade and had been best friends since about tenth. They had tried dating a couple times and realized it was like going out with a sibling and had called it off by quick and mutual agreement.

Lynette was pretty, if not a knockout. She was tall and a bit on the thin side, but had a winning smile and green eyes everyone envied. She was very smart, which had intimidated some guys, and it was true that she had a low level of patience for stupidity, but she was his best friend and he wanted the best for her. He thought the guy she was dating now might be the one for her, but he knew her well enough not to hold his breath.

Andy, Lynette thought, was just the type of guy she would like to find—in someone else. He was her intellectual equal, shared many of her interests, and wasn’t too bad looking. A little short for her tastes, but that was mainly because she was taller than average. He had thick, curly black hair that he kept cut too short, and an intriguing face if not actually handsome. His skin was dark but his eyes were atypically shaped and made her think that there might have been some Polynesian blood somewhere in his ancestry. He did have some Native American blood in his veins—Choctaw, to be exact—but it was so far back that it was doubtful if it were a contributing factor to his looks.

The way the evening had gotten started was that Lynette had shown up at his place an hour before, all dressed up, and saying she needed his help. Unwary, he had of course said yes before inquiring what sort of help would be needed. Lynette had then explained that she had tickets to the Wichita Falls Philharmonic Orchestra’s season opening concert for herself and Stephan but that her cousin from England had suddenly arrived unexpectedly and Lynette couldn’t just leave her at home and three was a crowd and so on.

It should probably be explained to the reader that very few inhabitants (i.e. “one”) of Lawton, OK, thought of the opening of the Wichita Falls Philharmonic Orchestra’s season as a big deal. Lynette, though, was an aficionado of classical music, a player of the viola herself, and had not missed an opening in Wichita Falls or Oklahoma City in five years. For four of those years, Andy had accompanied Lynette to the concerts out of friendship and had come to rather appreciate classical music, even if he had yet to buy a classical CD for himself. As a result, he had not been at all upset to find this year that Lynette had talked someone else into going with her to the concert.

Now, most people in Lawton facing a similar circumstance would probably have either called off the concert trip or given the tickets to someone else. This idea had never occurred to Lynette, even after Stephan suggested it. She promptly got online and purchased two more tickets to the concert. She had quickly dressed, then gone to get Andy, knowing if she called him on the phone with the idea of a blind date he might have some way to escape the issue.

So here they were, two well-dressed people on their way to Lynette’s apartment to pick up Lynette’s date and meet

Andy’s. Of course, Lynette knew her, but Andy had never met her, as far as he knew.

“How is it,” Andy asked, as if reading the narrator’s mind, “That I have never met this cousin?”

“You have, actually.” As Lynette sped down Cache Road, she said, “She came and spent a week with me when you and I were fourteen. I remember you came over one day and we all went swimming.”

“Just the three of us or was anyone else there, too?”

“Her sisters, your brother, and the rest of the youth group,” Lynette explained.

“So eight years ago I met an eleven year old girl and you expect me to remember her?”

“No, I don’t expect you to remember her, you just asked if you had ever met her. You’ve seen pictures of her, though.”

“Really?” Seeing all the restaurants they were passing, he asked, “Do I get a supper out of this or am I buying?”

“After the concert,” Lynette answered as she turned off the main road. “We’ll just barely have time to make it there before the overture. And we can go dutch treat if you like.”

As they pulled into the parking lot of the apartment complex where Lynette lived, she turned to Andy and said, “I really do appreciate you doing this. And I’ll explain it all to Carly if you like.”

“I’m not seeing Carly,” he said as they got out of the car. At Lynette’s skeptical glance, he said, “I’ve been out with her twice. I don’t know if there will be a third. And I know for a fact she’s dating other people. Which is perfectly fine with me, by the way.”

As they walked up the steps, he said, only half-joking, “I never asked you what she looks like.”

“You going to back out if she’s ugly?” Lynette asked, a laugh in her voice that made him curious what she was concealing.

“Don’t worry,” Lynette said as they neared her floor. With an even stranger lilt to her voice, she added, “If she’s not the prettiest woman you have ever been out with, I’ll buy your supper tonight.”

“The world’s cheapest graduate student is offering to buy me supper?” he chided in return. “For the first time today, I’m actually anxious to see her.

Andy opened the door to Lynette’s apartment and let her in. As he followed her in, he saw Stephan sitting on the couch. Stephan looked up from a magazine and smiled. “Hey, Andy. How’s it going?”

Andy came over and shook Stephan’s hand as he sat down. “Not bad. You doing all right?”

“Can’t complain … too much,” he added with a laugh, showing perfect teeth in his dark face. Stephan was a first year assistant coach and biology teacher at Lawton High who loved his job but also found it exasperating at times. He had been introduced to Lynette by one of his fellow teachers, who had attended MacArthur High with Lynette four years before. Their personalities had seemed like oil and water initially (she very Type-A, he exactly not) but the fact that he was more than her intellectual equal—and a shared passion for volleyball—had led to, so far, multiple dates.

“I’ll go see if Sonya’s ready,” Lynette said, disappearing into the back of the apartment. It was a one bedroom affair, with the kitchen, living room and dining area all being the same, but it was a nice place and Lynette had fixed it up pretty well. Her parents still lived in town and would have loved for her to move back in, but the idea was anathema to Lynette, even though she had returned to Lawton after her undergrad work.

When Lynette was out of earshot, Andy leaned close to Stephan and asked in a whisper, “This Sonya, is she as pretty as Lynette says?”

Stephan chuckled, then noticed the look on Andy’s face and asked, “Are you kidding?”

Stephan was about to reply when they heard the bedroom door open and Andy sat back in a more normal and casual position. He looked up (again, casually) to try to take a casual first glance of the cousin. His mouth casually hit the floor.