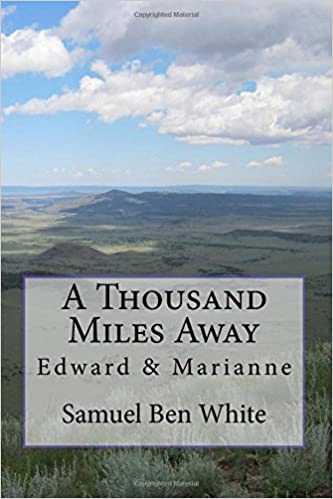 Edward Garrett finds himself washed up on the shore of a foreign land, shipwrecked! As he tries to find his way home, he becomes involved with The People, a friendly—but reserved—people who live along the coast and are being harassed by brigands from the mountains known as the Brazee.

Thinking that Marcus has brought him here for just this reason, Edward agrees to lead a posse into the mountains to try and retrieve four teenage girls who were captured by the Brazee. Edward’s greatest desire is to leave, to go find his beloved Marianne and let her know he didn’t die in the great battle by the river. In the process of freeing the girls, however, he is shot and lands in a Brazee prison. There, he is forced into gladiatorial games where the only way to freedom … is death. A futuristic fantasy in the tradition of Louis L’Amour.

Order today for Kindle or Paperback

And don’t forget the two prequels to this novel: “All the Time in Our World” and “Some of the Time“!

Running up the stairs of the tallest parapet of the grotesque castle that overlooked the river we in my day called the Mississippi, I was bleeding from a few minor cuts and my skin was bruised in many places, but I had never felt more alive. Nor had I felt more joyful.

Ahead of me ran Marcus, carrying his sword and with a light step as one who is running for pleasurable exercise. One might even say he carried the sword casually, though Marcus did nothing casually. All he did was carefully planned and meticulously executed. If Marcus had stopped to admire the sunset, anyone watching would have just assumed that was what he had always intended to do at that moment, for those who knew him knew that none of his steps, moves or halts were in waste.

Holding my own sword in my right hand, it’s blade still flecked with black blood for I had had no opportunity to clean it, my mind went back briefly to how we had come to be there. I say briefly for it was just a matter of steps, but the mind works in overdrive when in battle and a million thoughts may rush through a mind in their completeness in less time than it has taken me now to write this sentence.

We had crossed the great plains that I had once known as the land of Oklahoma with relative ease, though it hadn’t seemed so at the time. The logistics of moving such a great force of such disparate abilities and technologies had been one of the problems. The skirmishes we had fought against advance scouts of the Enemy had been another difficulty, though as we looked back later those battles had been like swatting mosquitoes.

As we had crossed into what had been known in my time as Arkansas and Missouri it seemed as if every valley and each forest held a new host of enemies lying in wait to ambush us. We had excellent scouts of our own, but it soon became obvious that it was not a position that promised a long lifespan. Though, as we went further, experience taught our scouts much and those who made it to the river with us were woodsmen indeed.

We came to the river fully six months after setting out on this excursion. We had been joined by additional members of the Gund Nation, as well as more Overstreets (who proved to be the best scouts for they could move through the forest more quietly than the wind itself) and even a large contingent of warriors from a people known as the T’rah’mra, who lived far to the southwest of Green River, along the sea coast. Somehow Marcus had gotten word to them and though they had set out before us it was some time before they could catch up to us. They were a people who were mighty in the skills of boat building and their service when we got to the river was immeasurable.

Still six days from the river, we had been met by a most surprising delegation. Eight men and five women—all taller than my six foot and appearing to me made of whipcord and muscle dressed in clothing that looked like something the Polynesians of my day might have enjoyed—arrived at our camp, also saying they had been summoned by Marcus. How they had received said summons none were ever clear, but Marcus greeted them warmly and assured us he had called for them. They were a people who called themselves a name which meant “Land of Wet Ground” but they were known in rumor and legend to the Gund as the Treemors.

They were somewhat darker of skin than I, but not so dark as the Cherokee or the T’rah’mra and, as I say, they were all tall. Some of them approached seven foot, though most were around six and a half. I was to find out later that they came from the deep woods that I once knew as Georgia and Northern Florida. Even with their bright clothing, they could disappear into a forest almost as well and quickly as an Overstreet.

The delegation of thirteen—a number of some significance in their reckoning—brought us the welcome news that they had a force of some hundred thousands amassed on the far side of the river, not twenty miles from the Enemy’s castle. They were the most advanced of the surface-dwelling people and maintained a primitive radio communication among their people. It was subject to disruption and had a limited range, but they assured me that they could and would work in concert with us when the time came to attack.

That time was soon. We knew the Enemy was aware of our presence and we were also certain he knew why we were coming, for he was not a being who welcomed casual visitors. While we hoped that we could maintain some element of surprise as to the “how-to’s” and “where-fore’s” of our attack, we knew that our only real hope lie in the justness of our cause. More than that, of course, was that Marcus was on our side and he had never been defeated—nor would he ever be we were sure.

I split our forces into three main divisions, though two of the divisions were—numerically—vastly superior. The smaller division—which was itself bifurcated—was our demolitions team. Half of them were to work their way to the western shore of the river and, on signal, begin to bombard the city with bombs my good friend Lomar would have relished to handle. The other half, meanwhile, had taken themselves up river approximately two hundred miles, to an ancient dam on the river that created what Marcus said was the largest inland, manmade, lake in the history of the world, larger even than the Lochs he, Marianne, Daniel and I had marveled at many years ago on our first journey. Upon reaching the dam, they would set charges and—from a safe distance—blow them and release the water of the lake.